WHAT: Feed your soul some fabulous music, meet some other local singers, and enjoy the clean Mt Evelyn air.
WHEN: Friday 20 – Sunday 22 September 2019
WHERE: Mt Evelyn Recreation Camp To sing with a group of people from all walks of life in a safe and comfortable environment was terrific. The beautiful harmonies that each instructor teased out of the group brought goosebumps upon goosebumps. The happiness instilled in me through this experience has lingered for weeks.

My life was changed forever at Mountain Fest; I stumbled upon it looking to sing with others and found gold. This weekend at the very least will expand your horizons both musically and socially and might just change your life; do it!

A great opportunity to share singing and moving in harmony. A opportunity to learn a variety of different vocal styles A great place to meet like- minded people.

A great balance of singing, learning, playing and getting to know other music lovers. Chris and the team were professional in their approach and made sure everyone was included and had a good time. Thanks so much for a fantastic event. 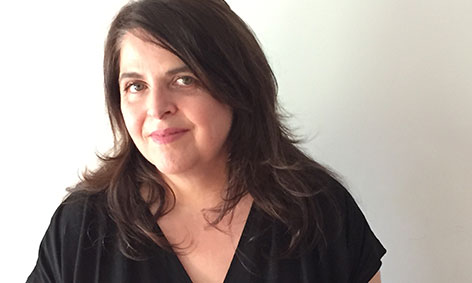 Lusa Washburn specialises in Maori and Pacific Island harmonies, and is a member of the multi award-winning barbershop quartet THE MUSICAL ISLAND BOYS.

The quartet has received countless National and International Barbershop awards, and are three-time National Barbershop Quartet champions, smashing NZ record books each time they have competed. The boys won Gold at the 2004 Pan Pacific Competition, and in 2006 made history, securing World Championship U25 Gold in Indianapolis, being the first quartet from outside of the United States to capture the prestigious trophy.

They are the 2014 World Champions, having beaten a field of over 50 of the best quartets in the World in Las Vegas. (The highest possible award in Barbershop!)

Lusa is also a member of the Melbourne Pasifika Mens Choir,  who perform a mix of Pasefika songs and medleys that embody Samoan, Tongan, Rarotongan, Maori and Tokelauan languages. 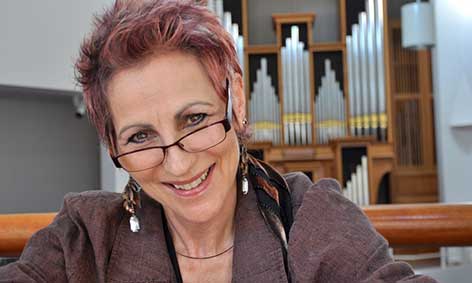 Kathryn Sadler studied voice at Trinity College, London; education at Surrey University; opera and music theatre at the Victorian College of the Arts and, as the inaugural recipient of the Australian Elizabethan Theatre Trust scholarship, advanced choral conducting with Dr Doreen Rao at the University of Toronto. She is also a Certified Master Teacher- Estill Voice International. She has worked in music theatre, TV and cabaret, sung on the recital platform and performed with most of Australia&#39;s opera companies.

Kate is also a renowned Australian composer and many of her KateSongs choral compositions are being enjoyed by choirs all over the globe. Renownedly, Kate directed The Mac.Robertson Chamber Voices, VoxSynergy (runners-up; Battle of the Choirs), Cantabella and currently directs Sounds of Southgate.

Kate runs a thriving singing studio, her VoiceArt Consultancy, where her singers come from all walks of life and range from 13 60+. She continues to be in demand to take vocal and choral workshops and masterclasses and held the Chair for the Brian Stacey Memorial Trust until its conclusion in 2016 after 20 years of awards for emerging Australian conductors. 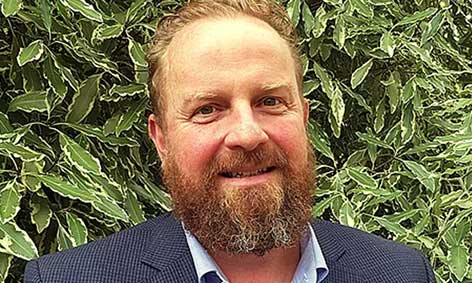 Andrew had extensive exposure to music from a young age, with a father who was the Church Organist, and a mother who was a Singing Teacher.  He started piano lessons in Primary School, and moved on to clarinet in High School, which earned him a Music Scholarship for his last two years of High School.  He played clarinet with the Sydney Schools Symphony Orchestra (SSSO) and represented his school in numerous mass choir events.

He’s got a passion for good harmony, and strong community. 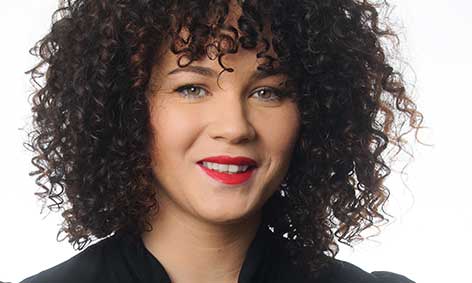 Tenille Kearney is a choral specialist currently working at Star of the Sea College in Brighton. She is a qualified music and singing teacher and has a wealth of teaching and performance experience in Australia and internationally.

Tenille is the coordinator of Star’s “Stacella” program in which students are taught a cappella and world music as a classroom subject. This choir consists of over 230 students from Years 7 to 12, and performs in numerous local competitions and events, and tours internationally. Tenille has been Head of Music, vocal coach for numerous musicals and has a passion for creating and building choral programs in schools.

Tenille has worked with Ubuntu, the African Children’s Choir, when it visited Melbourne in 2016 and 2018. She has also travelled to Uganda to work with choirs, and to perform and conduct. In 2018 she conducted the mass choir for the Catholic School Gala “Time To Shine” that was televised nationally and held in the State Theatre. Chris’ a cappella man-band SUADE performed for nearly twenty years, touring extensively, both locally and internationally. They produced four albums – the latest self-produced by Chris and his brother Loz.

Chris works with MusoMagic, running youth leadership and development programs throughout indigenous communities in Australia, and runs music programs for Red Dust Roel Models. He’s also the musical director of “Men In Suits”, runs Melbourne’s “With One Voice” choir, and was a co-founder and director of Vocal Australia – Australia’s a cappella singing hub.

He’s also the director of Melbourne Singing Events, and Keynotes Team Singing – ventures aimed at bringing communities together through song – and a registered civil marriage celebrant to round things off! 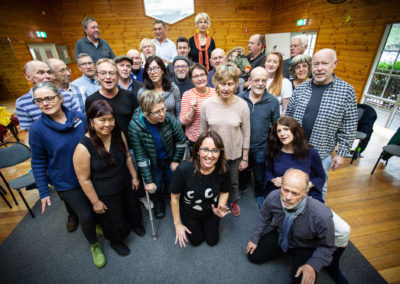 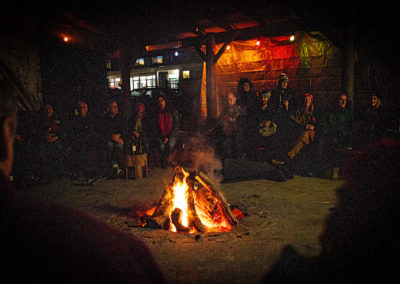 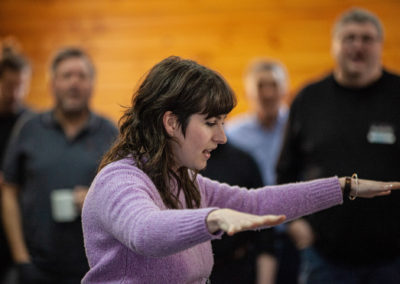 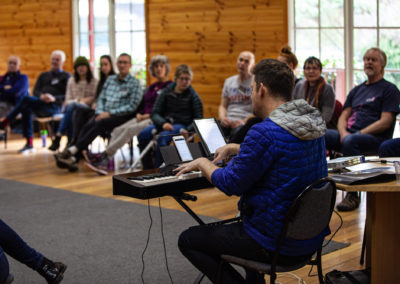 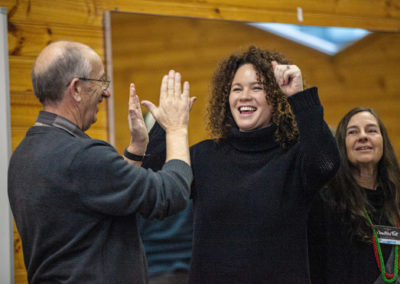 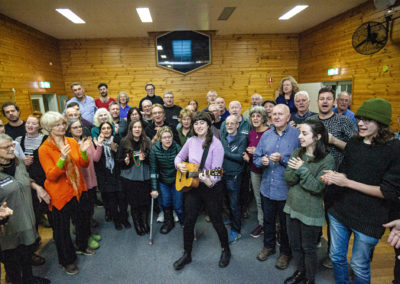 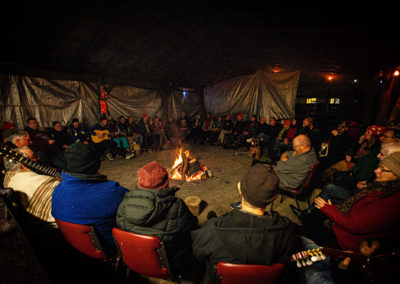 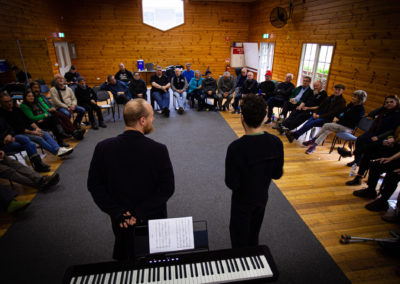 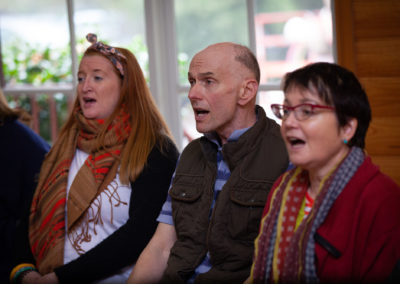 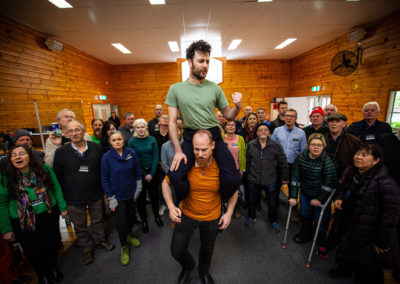 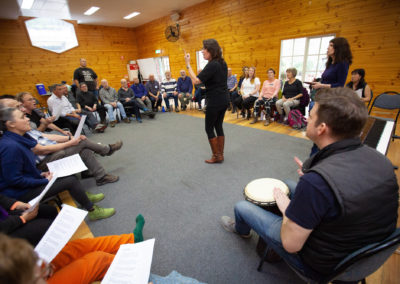 If you like singing in a friendly environment, this is the event to come to. Great teachers, great group, a fun weekend!

I can’t think of a better way to discover how much fun singing is – even if you’ve never sung before. If you think you can’t sing but wish you could, this is the perfect place to start exploring.

A fabulous weekend for those who love to sing in company with others. Simple but perfectly adequate accommodation, sessions presented by top choir leaders, the chance to sing around the fire pit into the wee small hours, lots of good company.

It was a challenging and fun exploration of so many different types of music – it was so amazing what we were able to achieve and it really fired up my passion to do more.